An exercise in creative storytelling

25hours Hotel One Central delivers a whole new slant on hotels in Dubai. It has an exciting and vibrant design – where “tradition meets modern day” and every space has a story to tell. For the hospitality group’s first hotel outside of Europe, we developed interior and exterior lighting schemes packed with detail to reveal each of these individual stories.

The entrance pathway immediately introduces guests to the playful nature of the hotel with its eye-catching peppered illumination. Across the facade, uplights between the windows create a wash of light that dances across the exterior and reveals the patterned walls.

Inside, the lighting design underpins the vision for each of the 434 unique guest rooms. The five themes: Bedouin, Glamping, Farmstay, Artist Village and Hakawati are emphasised by how the team has layered light, mixing spotlights and discreet downlights with reading lights and pendants, adding depth and character to every room.

The Fountain of Tales within the lobby is a centrepiece to note. The tiered seating doubles as a bookcase and is brought to life by integrated joinery lighting that leads the eye upwards to where a water fountain frames a colourful, rotating globe.

Casting a gaze over the fountain is Under the Same Sky, an amazing 26-metre ceiling mural of key constellations entwined with Dubai landmarks. We washed the ceiling with indirect light, framing the scene and casting the lobby in an ambient glow, creating an inviting look and feel.

Up on the sixth-floor, the wilds of the jungle-inspired Monkey Bar are brought to life through subtle lighting design techniques. Decorative pendants mingle with ceiling planters and are combined with low-level lighting from both wall and floor lamps to add to the drama. And the pièce de resistance? The bright-eyed monkey that sits behind the bar, encouraging guests to engage with the space as they sit under his all-seeing, illuminated orange eyes.

The uniqueness of the 25hours brand. That certainly made this project an exciting challenge. We had to think outside the box and away from the norm that is hospitality in the Middle East. 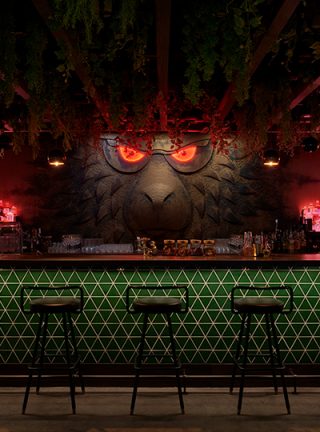 Working with the architect, we designed a facade and landscape lighting concept for Midtown...

At 125-metres and framed with a blade of light, this waterfront hotel stands tall...

For Bangkok Design Week 2021 we teamed up with Nikken Sekkei Thailand to design...

Browns’ new flagship boutique invites visitors to experience the future of retail whilst absorbing...
FIND OUT MORE
To learn more about us and our award-winning work, order our brochure
Request a brochure