The 17th edition of London Design Festival drew upon talent from all across the world to celebrate future trends and innovation.

This year there were eleven design districts – from Kensington in the west to the Shoreditch Design Triangle in the east – with a multitude of showrooms, site-specific installations, trade shows and creative design pop-up points.

Walking around the various design districts there were a number of immersive installations being used to generate interesting talking points. Climate change and the future of artificial intelligence were just two of the compelling themes on show, used by designers to both spark debate and showcase the technical skill at the heart of the design industry. Wider global topics as such mental health and wellbeing also stood out from talks and discussion panels.

Here’s a look at our highlights from this year’s event:

Visitors were guided through an immersive journey inside gemstones as they walked through footage of oversized rubies and emeralds. The experience culminated with a multi-sensory spatial installation, formed by a square platform of projected screens surrounded by cubes featuring colourful lighting effects.

The projections showcased the interior world of gemstones through a selection of tiny microcosm photographs that recall galaxy-like structures. Fortnum & Mason in Piccadilly exhibited spatial artwork by Liz West. Made up of 150 dichromatic-framework structures, the installation was suspended throughout the building’s historic staircase to create the illusion of a precious crystal chandelier.

Iri-Descent is part of the artist’s research on how sensory phenomena can invoke psychological and physical responses through the interaction between colour and light. Please Be seated, By Paul Cocksedge

The installation naturally invited visitors to “be seated” or walk around the feature’s curves, designed in three concentric circles that flowed up and down like waves. Sam Jacob’s large-scale installation within the V&A’s entrance was one of the stand-out landmark projects from LDF. Entitled Sea Things, a huge suspended mirrored cube formed an immediate impression not just through the grandiosity of the installation itself, but also by the animated graphic that showed floating plastic objects in the ocean environment.

Through his installation Sam Jacob made us all stop and think about the global single-use plastics crisis, engaging us as designers to re-think design in a more sustainable way. Lee Broom once again used theatre and scale to present his products in a very original way, transforming his Shoreditch showroom with a truly disorientating installation.

Created using infinity mirrors that played around with kaleidoscopic impressions, Lee Broom produced a wonderful optical illusion by using lights and mirrors to create the illusion of around 200 lights. Affinity in Autonomy, By Sony Design

With Affinity in Autonomy, Sony Design created an interactive installation made from suspended metal spheres featuring artificial intelligence inside.

A “magic wand” moved randomly inside the sphere cage, trying to engage with visitors by seeking an emotional and physical response. Once a human presence was intercepted, a colourful light shone at the end of the dynamic pendulum.

Affinity in Autonomy gave a glimpse into the future of human interaction with artificial intelligence and robotics. Take the Plunge, By Volume Creative

Bargehouse at Oxo Tower Wharf played host to Volume Creative in collaboration with Virgin Voyages. Visitors were invited on a playful journey of discovery as they stepped into an endless horizon, then dived into a new space that depicted a sunset under the sea. 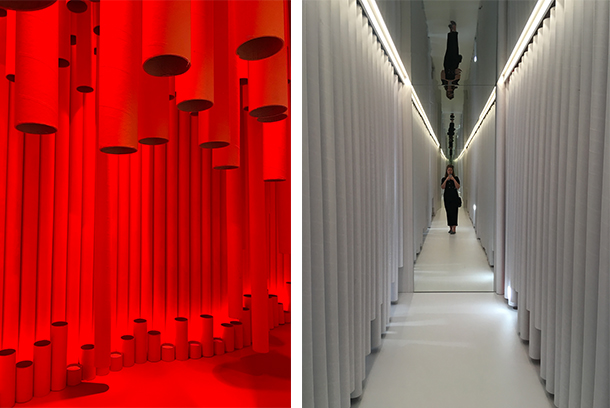