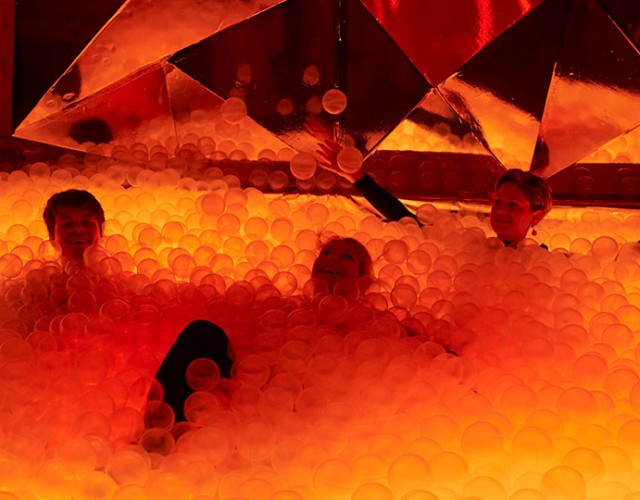 It’s fair to say the UK’s lighting industry isn’t lacking when it comes to award ceremonies. We’ll be honest, when Light Collective approached us to take part in an “alternative” award event our first thought was “Not another one”. But, we knew if Light Collective was involved it could mean something different, so we cast our apprehensions aside and got our lighting design skills at the ready.

In collaboration with Light Collective and mondo*arc / darc, the Darc Awards recently held at Testbed1/The Doodle Bar in Battersea was a huge breath of fresh air within the industry. With 12 collaborations between lighting designers and manufacturer, the event showcased how diverse and crazy lighting designers’ minds can actually be without limited restrictions.

The whole process started five months ago. We were paired up with Griven Lighting – a specialist in outdoor LED lighting – and were allocated an area in the cool venue. With constant scrutiny and changes, our team came up with an amazing design for the main entrance – yep, main entrance, we were pleased with that. Anyway, that didn’t last long as unfortunately it turned out it wasn’t a permitted space. Oh well. Never backing down from a challenge, we rallied together and created a totally new concept for what could only be described as a small and puzzling spot. We really wanted to create something with a twist and our initial intention was to design not only an interactive lighting installation, but also a space where you could be immersed in light. And there we have it – the concept of “THE WAVE POOL” was born.

This site-specific installation was centred round a mirrored wall erected from a deep ceiling void to form a wave of facets and reflections that fell into a pool of light – a pool that was filled with over 9000 translucent balls! (Yes, it was heaps of fun.) We designed the lighting effect to mimic a “rainfall” of light. A coloured wash started at the top of the installation, bleeding through the edges of the wave and piercing along the one-way mirrored facets. The sequence continued to fall down the void, “dripping” from the pixel sticks before spreading the coloured light out into the pool. The brilliantly programmed sequences featured three different colours in motion, with a bright white wash of light in between, flooding the entire area around the installation. With scale and first-hand interaction in mind, the light art installation encouraged viewers to become participants, impacting their perception of the environment, stimulating the imagination and changing their visual perspectives, all while enjoying a swim in light! Not only was our light installation a success during the event, it also created a wave of “bubble bath” inspired pictures and took social media by storm. At the end of the evening, there were thousands of balls all over the event space, and, apparently, a few appeared in different parts of London the next morning. Our installation might not have won that evening, but it did win the hearts of the so-called lighting industry grown-ups (we know they’re all kids at heart really). We had a blast creating our design and have set the bar very high for ourselves when it comes to next year’s event.

On behalf of the Nulty team, we’d like to give a big THANKS to Jim and Robyn from Griven who helped, supported and tolerated our crazy ideas throughout the entire process.

Did someone say competition? We love nothing more than flexing our lighting design muscles,...